COMFORT  is the result of Böckmann’s fantastic breeding programme; his dam Avienna is one of their best-producing mares and Caunton Manor Stud are incredibly proud of him. He is a seriously athletic horse, with amazing movement, jump, scope, and rideability. An elegant, blood-type stallion. He is ideal for adding quality, blood and refinement to a heavier mare.

Comfort has strikingly good looks and a temperament to die for. He is athletic and bold, suiting a variety of mares. His progeny not only carry his good looks as he stamps them well, they also carry his athleticism and trainability. In 2019 his two year old son was presented at the Oldenburg Stallion Licensing and then sold for €60,000 to a top jumping yard after showing his outstanding jumping ability. 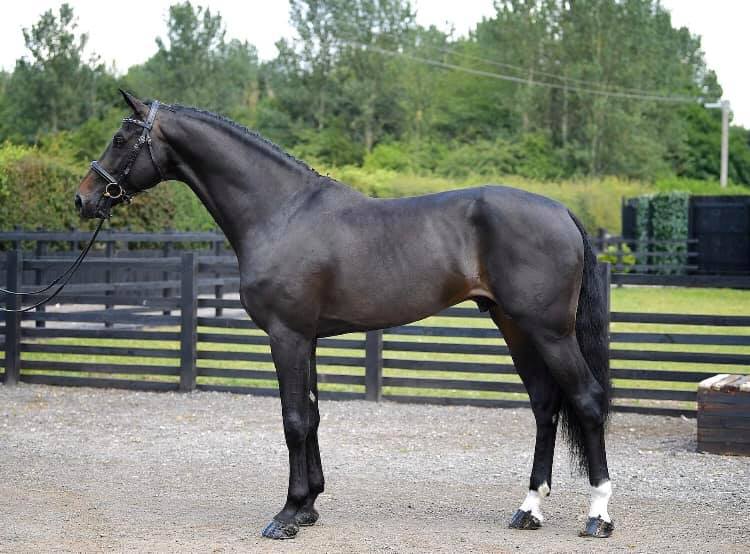 Comfort is proving exceptional in competition himself, having competed on the Sunshine Tour in March 2019, in the CSIYH* for 6yo horses. He placed 1st in the 1.25, producing super double clears and also competed in the 1.30 class. He is continuing his career in the UK under Matthew Wright, competing in both Jumping and Eventing.

Comfort became the 2015 acclaimed second reserve champion of the OS licensing in Vechta. He not only convinced the inspection committee, but also the spectators. He always got along very well with the distances of the free jumping series and performed outstandingly on all three days of the licensing.

He is suitable for Eventing and Jumping mares, as he is carrying nearly 40% Thoroughbred blood.

Sire – Sire Christian made his advanced debut at the age of seven, and placed first in international classes right from the beginning, and now continues his unblemished career under Jamie Gornell in the UK. In 2012 he reached the final of the Bundeschampionat for six-year old show jumpers with top scores. At his stallion performance test in 2009, Christian received the maximum score of 10.0 for his jumping talent. 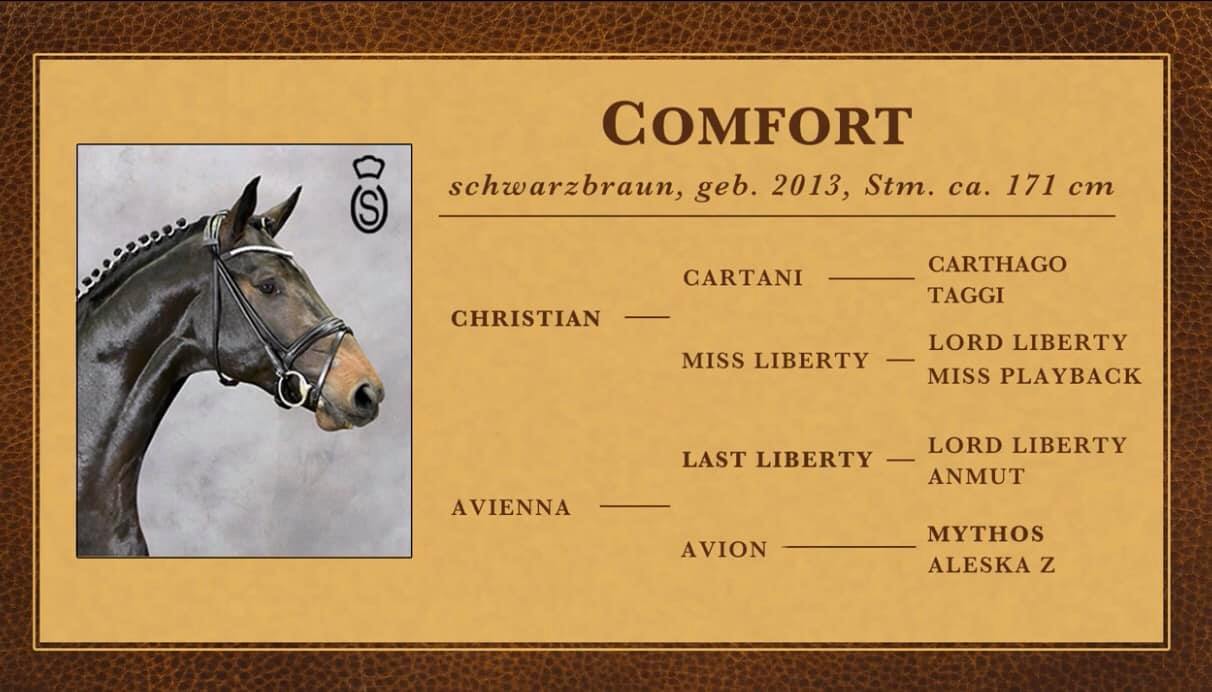 Comfort was the second son of Christian to be licensed, and also full brother to the four year old stallion Charlie Weasley, who proved popular with spectators at the 2019 Bockmann Stallion Show where he was ridden by top German Event Rider Sandra Auffarth.

Damline – The dam, Avienna, also has approved stallions in her own right, Caicos by Calido I, who at his stallion performance test in 2013 scored a 9.0 for his free jumping and has had success in show jumping competitions. Her son Gabbiano by Grandeur, was placed at the Bundeschampionat and posted successes under young Leonie Böckmann to CSI**  jumping level. Avienna also produced the M-jumping stallion Guiness, also by Grandeur.

The dam’s sire Last Liberty comes from the full sister of World Cup winner Aramis under Mario Deslauris, and the licensed and placed in show jumping stallion Armani.

Gabbiano (by Grandeur)
Gabbiano placed with the best at the Bundeschampionat and, with the young Leonie Böckmann, he added successes in advanced level show jumping to his performance record.

Charlie Weasley, is the full-brother to Comfort .

Furthermore, Avienna is dam of the medium level show jumper Guiness (by Grandeur). The damsire Last Liberty is out of the full-sister of World Cup winner Aramis, and the advanced level successful jumping stallion Armani. The granddam Avion produced Grandeur Noir (by Grandeur), who was placed at the 2009 and 2010 Bundeschampionat, as well as at the World Championships for young show jumpers.

The granddam produced Grandeur Avion Noir, who placed in show jumping at the Bundeschampionats and the World Championships for young show jumpers in 2009 and 2010. 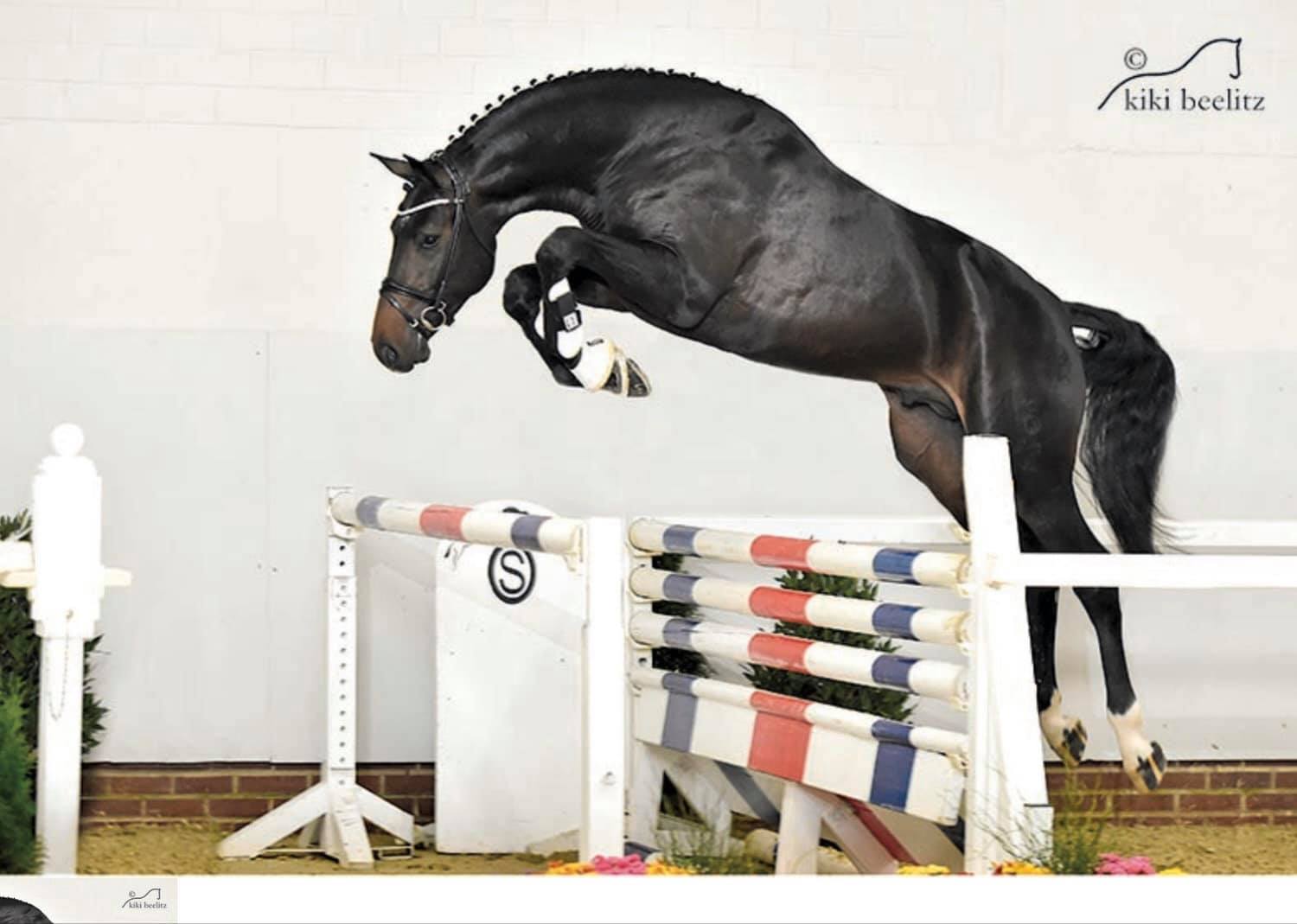