It was a glorious weekend of sunshine for competitors at Cooke Coachbuilders Stafford (2). Temperatures were just right, and the Plant family had done a fabulous job of prepping the event as always. The ground had good grass coverage without being 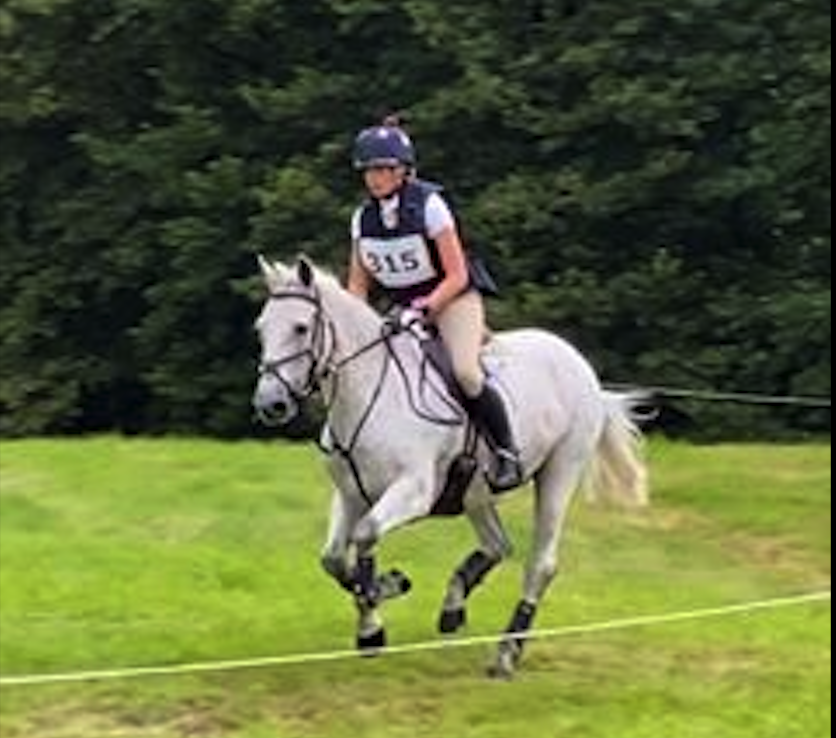 too hard underneath. The cross country course (designed by the Plant’s) was beautifully presented, with enough challenge to create interest but also inviting enough to be an event to consider levelling up at. The show jumping was designed by Susan Barratt. The weekend boasted of 15 sections, ranging from BE80(T) to BE100.

Saturday saw the turn of the BE80(T) and BE90 competitors. Amongst the winners was BE80(T) Section E’s Alexandra Morgan and her own Machno Rhodri. They led from start to finish in a section littered with faults throughout each phase. She spoke to Eventing Worldwide:

“I’m over the moon with Rhod. He felt utterly amazing all day and we finished on a PB score of 23.5! Which is incredible! I’ve owned him for 3 years now and every day is a privilege to ride him.”
Another winner in the BE80(T) class was Section G’s Rachael Ward, with Out of the Blue II. It seems Paddy suited to the eventing lifestyle, as he only added 2.4 time penalties to his fantastic dressage score of 21. Rachael said:
“I am based in Leicestershire and work as a land buyer for a house building company. My family have owned Out of the Blue II (Paddy) for 5 years – we purchased him as a 4 year old to be a happy hacker for my mum. She asked me to school him for her and I’ve gradually taken over the ride! He’s an absolute star pony.
I was really pleased with my dressage mark as I’ve worked hard over the winter with my dressage trainer, Steph Croxford. A lesson with her they day before competing was a really good tune up.
It’s the first time I’ve competed at Stafford and I’ll definitely be going back next year. It was really well organised, all information (optimum times, course photos etc.) was available online before the event and all organisers and volunteers were really friendly and helpful.”

Other notable wins came from the BE90 sections. Serena Allery only added a pole to an incredible 17.5 dressage score in Section A. Meanwhile in Section D, Abigail Bingley took the win in the Regional Final section with a 2.5 point margin, finishing on her dressage of 24.5.

The sun shone bright on Sunday, with the return of the BE90’s as well as the BE100 sections. Kitty Taylor took a 3 point victory in the BE100open Section K with Noble Rebel. She spoke to Eventing Worldwide:

“Alfie was on flying form at Stafford! After a lovely test he then did a double clear to finish first. It felt so great to end the season with a win under his belt, after 6 seasons together and numerous 2nd& 3rd placings. He is now 20 and just loves his job.”

In the BE100 sections, the placings were tight, but the victors that emerged were as follows:

Section L, the BE100 Plus, was won by Regal Mix, ridden by Sally James. They showed the tougher dressage and show jumping sections were no problem, as they finished on their dressage score of 25.5.

In the afternoon’s BE90 sections, Julie Jones and Lucky Pursuit won with a pole in hand in Section M, whilst in Section N Robyn Gray and KEC Moment in Time finished on their dressage score of 20.