Frickley Park welcomed Frickley (1) and its competitors over the weekend to continue the fun had as a result of British Eventing’s green light to resume competition. Entries were so popular, an extra day was added on the Friday to accommodate and all sections were full. The scenery was as stunning as always, with showjumping (a testing track designed by Tracey Barraclough) in front of the house and a well presented cross country track from David Carpenter. Classes ran from BE80(T) to Novice. 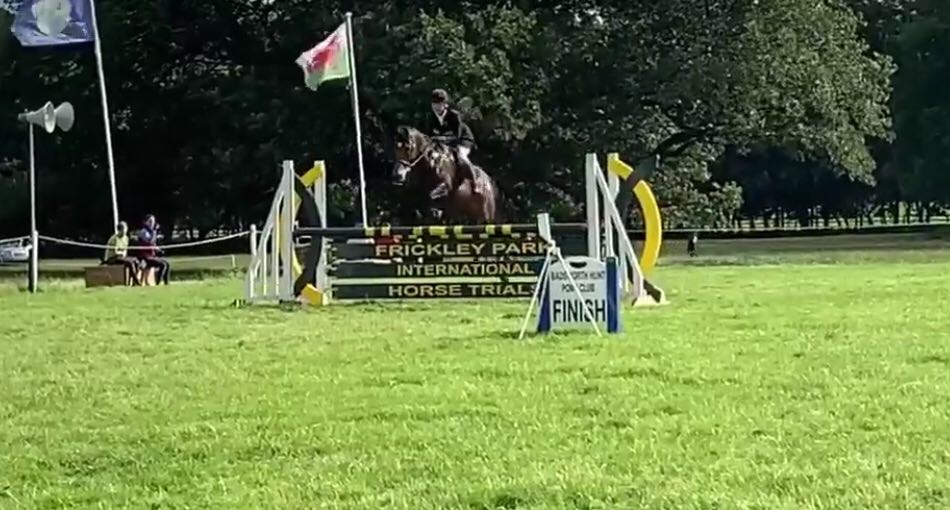 “The event was put on with 4 weeks notice, which was a manic period, especially when we decided to put on an extra day with only 14 days to go. It would have been much easier to stick with two days, but that would have meant balloting out hundreds of competitors, which would have been very disappointing for everyone. Despite the tight timeframe, the event ran perfectly and the feedback we have received has been very positive. We brought in lots of PPE sponsored by Robinson Healthcare, but in fact most people came very well prepared and stuck to the rules. And whilst it was odd not having secretaries and commentary, the parkland was a serene place to spend 3 days. The new BE protocols worked very well and we think lots of aspect of the event will not revert post-Covid. For example, the fully electronic scoring system was very impressive whilst taking up a lot less volunteer resources. We are now looking forward to our September event and working out how to improve our XC yet further.”

“First BE event back since lockdown, mother very nervous as about to advertise Charlie for sale so wanted a good run, should have known Charlie wouldn’t let us down. He is such a fab pony, he comes out at 100 and does the same performance every time; a lovely accurate calm test and usually a double clear, Frickley was no different. Frickley is one of his favourite events as he won the 100 here last autumn! Really well run event considering all the COVID precautions that were needed. A XC course that was great for a first run back, bold and inviting. No dramas or twists unfortunately to report as Charlie doesn’t do drama!”

In the BE90, Section D was hotly contested with only one pole separating the top 9. However, it was Sarah Kranz and Pictus Durian who were victorious, after their phenomenal dressage score of 21.8 still allowed them take the win after dropping a pole showjumping and adding 4 time faults cross country. Section E was taken by Miss Alex Hill and Ardbear Ray, whilst Section F saw Simon G Dyson and G-Star WD on top.

Saturday saw yet more BE90 sections as well as BE80(T) competitors. BE90 Section C was topped by Tina Canton and Shananshah, finishing on their dressage score of 27.8. Tina had a successful weekend, taking 3rd in Section I and 11th in Section P.

Annie Dean and Flash won BE90 Section H, whilst the Open section was taken by Lexie Brennan and Stenigots Red D’Ablo.
In the BE80(T) sections, Section J was won by Hannah Kelly and Birchwood Butterfly. Hannah said to Eventing Worldwide:
“I’ve owned Bella a year now and have always had a major interest in eventing, I did a bit with my ponies but as I got older needed something bigger and with more potential. I’ve been training with Jordan Kavanagh since owning Bella and had a good first run of the year at Oasby finishing in 8th place. I knew I needed to work harder on certain disciplines, I’ve moved Bella permanently with my trainer and have spent the last 4 weeks really pushing to be the best I can be, and it’s paying off this is shown by my winning our first event back after lockdown!! Hopefully this is the start of a great partnership with me and Bella.”
Sections K and L were taken by Sammy-Jo Clare and Over in Paris, and Laura Bailey and Loughwell Laren respectively

The morning saw the Novice competitors show us how it’s done with style, many cruising round the fabulous course set out on the park.

Oliver Townend did what he does best, taking the win in Section O with Cooley Rosalent and the Open Section with Seychelle.

Other winners included Section M’s James Rushbroook and Always On My Mind (winning the section by being closer to the optimum time), and Section N’s Alanis Milner Moore and Miss Maybell.

When walking the course for the BE100 classes, it proved to be an inviting course to get riders back in the swing of eventing, but also with just the right amount of challenge to create interest on the scoreboard.

Section Q was taken by Alexander Tordoff and Inory, whilst the Open Section was topped by James Sommerville and Global Ask.

The competition was extremely well run, and every measure was put in place to keep all competitors and volunteers safe. A huge thank you to all helpers, organisers, officials and volunteers involved in creating such a marvellous weekend of safe sport.